The Delicious One, more commonly known by his initials TDO, is the second and current mascot of Wienerschnitzel, created in 1999 by his voice actor Luke Thomas and developed by Lane & Jan (Lane Nakamura and Jan Chen). He is an anthropomorphic chili dog.

TDO has limbs and brown hiking shoes with the Wienerschnitzel emblem.

Almost everyone desires to eat TDO due to his being a hot dog and his trademark is when he runs off screaming in terror.[1]

In 1997, Creative Director Courtney Betley and Senior Art Director Julia Cadar set out to create the World's Most Wanted Wiener for Wienerschnitzel, with TDO coming to mind. The character of The Delicious One (or TDO) started as a Claymation character, created and voiced by Luke Thomas and developed by Loose Moose in London (who was beginning work in the United States) in 1999. This early version of TDO had misread every situation; somewhat naive, TDO thought everyone always wanted him around due to his delightful personality and charm, only to quickly discover in almost every situation that they wanted him for more nefarious reasons (they wanted to eat him). He was constantly on the run, trying to escape the clutches of hungry people.[2]

Shortly after his fame, Wienerschnitzel released antennas with TDO holding a small, yellow box with a fearful expression. There are alternate versions of this antenna (one with TDO wearing an Uncle Sam hat). TDO was last featured in the advertisements in 2008.

In 2011, Wienerschnitzel released antennas known as the Golden Wienie.[3]

In January 2014, following public demand, Wienerschnitzel re-introduced TDO in a 2D-animated version, with Justin Roiland taking over from Luke Thomas. TDO has only been in this animated form or as a costume. Some Wienerschnitzel fans have made petitions demanding his return in CGI capacity and Thomas' reprisal.

TDO is a friendly, pleasant, loyal, caring chili dog with a good heart of gold. However, he can sometimes be quite nervous, paranoid, and anxiety-ridden. This is most likely due to the fear of most people wanting to eat him.

TDO likes to sing and dance and enjoys making friends. He also likes to play dress up, watch television, and play video games. He sometimes likes to exercise in his spare time. TDO also likes to tell jokes.

Despite his ups and downs, he tries his best to be more optimistic and hopeful. He can sometimes be a bit distrusting of many people due to most chasing and trying to eat him. 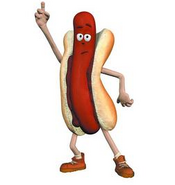 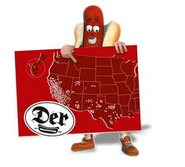 Retrieved from "https://wienerschnitzel.fandom.com/wiki/The_Delicious_One?oldid=4772"
Community content is available under CC-BY-SA unless otherwise noted.